AKA the Elgin Marbles. All my life it seems as if we haven’t been talking to Greece about sending them home. Recently, there was a strong dismissal of any such hope. But today, I read that the British Museum is open to discussion. Statements from the Deputy Jonathan Williams and even the Chairman, ex Tory Chancellor of the Exchequer, George Osborne, have expressed optimism that there is a ‘deal to be done’.

Reading between the lines, the position appears to be based on the ‘fact’ that we own them legally, and that, by discussion of mutual loan arrangements, some, if not all, of the stones, can go home on loan, in exchange for other loans from Greece coming to the UK.

Nearly, all ‘restitution’ cases are settled by the realisation that there are mutual benefits to be had for the return of items. The Horniman is leading the way with its announcement to return 72 Benin Bronzes to Nigeria.

The statement from Nigeria suggests that mutual loans are a part of the deal here too.

Abba Tijani, director-general of Nigeria’s National Commission for Museums and Monuments (NCMM), said: “We very much welcome this decision by the trustees of the Horniman Museum & Gardens. Following the endorsement by the Charity Commission, we look forward to a productive discussion on loan agreements and collaborations between the NCMM and the Horniman.”

The Society of Antiquities newsletter ( Salon: Issue 494) reports on a restitution deal of one of the major collections of Benin bronzes back to Nigeria.

The Bronzes, which are actually Brasses, are from the Royal Palace of the Kingdom of Benin which was looted by the British during the Benin Expedition of 1897 as part of British subjection of Nigeria.

Wikipedia reports that ‘Two hundred pieces were taken to the British Museum in London, while the rest found their way to other European museums. A large number are held by the British Museum[ with other notable collections in Germany and the United States.’

The Smithsonian has recently made a similar arrangement to restore their brasses to Nigeria, and UK collection The Great North Museum: Hancock, has followed suit joining Jesus College, Cambridge and the University of Aberdeen. (The Art Newspaper)The British Museum has refused and is indeed prevented from so doing by an Act of Parliament.

An interesting sidelight on the collection is that the wealth of the Benin Kingdom benefited from income from the slave trade.

This is what The Society of Antiquities newsletter ( Salon: Issue 494) says:

Last week, Germany signed a restitution agreement with Nigeria. The agreement covers 1,100 artefacts currently held by the Linden Museum in Stuttgart, Berlin’s Humboldt Forum, the Cologne Rautenstrauch-Joest Museum, Hamburg’s Museum of World Cultures and the State Ethnographic Collections of Saxony. The agreement immediately puts these objects into Nigerian ownership; the affected Museums will then 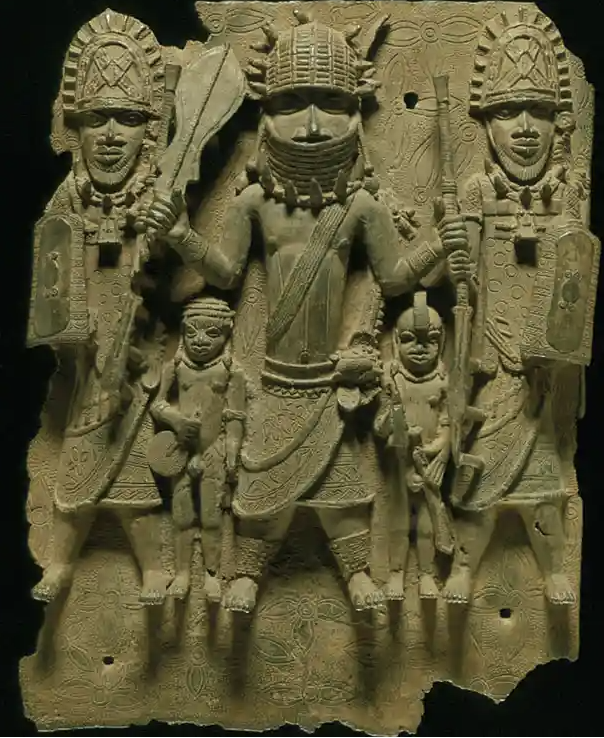 negotiate directly with the Nigerian Government whether they return to Nigeria, or remain in Germany under custodial agreements.

Lai Mohammed, Nigeria’s Culture Minister, described the agreement as ‘the single largest known repatriation of artefacts in the world’. It was marked by the return of two Benin Bronzes – an eighteenth century 35kg head of an oba and a 16th-century relief depicting an oba accompanied by guards or companions. German foreign minister, Annalena Baerbock, said ‘It was wrong to take the bronzes and it was wrong to keep them. This is the beginning to right the wrongs.’