Just in case you have not heard of the recent discovery of this mosaic on the Bankside in Southwark. Below is what Salon, the online newsletter for the Society of Antiquities, said about it. Below that is the Guardian’s coverage.

This site is next to a site that was worked on in the 1970s/1980s, called Calvert Buildings. The site was developed in the early Roman period with strip buildings made of timber, which were replaced by a stone building identified as a possible ‘Mansio’ – an official Roman travel lodge. I think, although useful details are hard to find in the gush of admiration for the mosaic. that it is thought the Mosaic is part of the Mansion.

Just minutes from the Shard, Museum of London Archaeology (MOLA) have unearthed a beautiful Roman mosaic, featuring colourful flowers and geometric patterns. The mosaic, at over eight meters 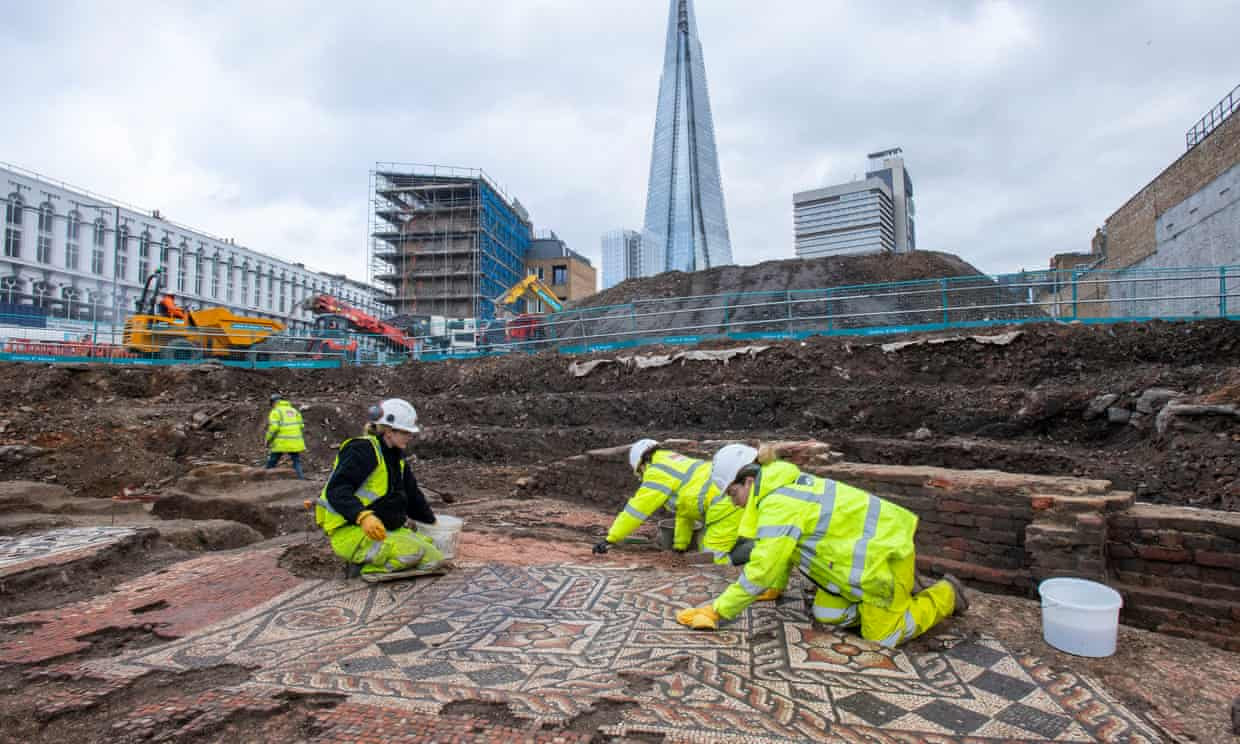 long, is the largest found in London for over fifty years and dates to the late second or early third century.

The main panel of the mosaic features large flowers, surrounded by twisted-rope bans, across a red tessellated floor. A smaller nearby panel, as well as the main mosaic, feature geometric elements and lotus flowers and both are remarkably well preserved. David Neal FSA, an expert in Roman mosaic, says that the design likely was created by a team of mosaicists known as the Acanthus group, who had a unique style. Indeed, there is an impressively close parallel between the smaller panel and another mosaic discovered in Trier, Germany, demonstrating that the

It is believed that the mosaic, which was discovered a month ago, was part of a triclinium, a dining room with couches on which people would recline to eat and drink. This was likely part of a Roman mansio, an upmarket establishment offering accommodation, stabling, and dining facilities for state couriers and officials travelling to and from London.

Perhaps appropriately, the site is being redeveloped as ‘The Liberty of Southwark’, a complex of offices, homes and shops. The mosaic will be lifted later this year to be preserved and conserved off site, and the eventual aim is for the work to be on display publicly.

This walk has now been completed but will be rerun soon.

The Romans gave the name of Saxons to barbarian pirates that plagued the North Sea region in the Late Roman Period. Historians link them with the Angles to create the germanic Anglo-Saxon period of which London was the leading town. But excavation and DNA analysis make the traditional story more difficult to sustain and although the Anglo-Saxons have a rich history how much of it can be trusted? Was there a Dark Age? Or was it just a ‘transistion’? How did English become the main language sweeping aside native Celtic languages? Much of the story of Saxon London has been founded on myth and dubious historical sources, but archaeological, documentary and genetic research has beginning to provide a clearer narrative.

Following the fall of Roman Britain, London was almost deserted. On this walk we explore how London recovered and grew to be the most important City in England by 1066. We will concentrate on the period from 600 AD onwards, and will begin with the story of Lundenwic at Covent Garden. We will then walk along the Strand and Fleet Street to visit the empty City of Lundinium which had a rebirth in the 9th Century as Lundenburgh and which grew to become London – the largest City in the Kingdom by 1066.

This is a London Walks event by Kevin Flude To book click :

Most Thursdays at 6.30pm City of London

Please note that you need to check it is running this week and book on this link.

This walk tells the epic tale of the uncovering of London’s past by Archaeologists. And provides an insight into the dramatic history of the Capital of Britannia, and how it survived revolts, fires, plagues, and reacted to the decline and fall of the Roman Empire.  It became the foremost English City but with periods under Viking and Norman control.

We tell the story in the streets of the City of London, beginning in the valley of the River Walbrook by the Temple of Mithras, and visit many sites where important archaeological discoveries were made, including the Roman Forum, Amphitheatre. Bath Houses, Temples, Roman roads and the City Walls.

We explore the origins of London. The walk is given alternately by Kevin Flude & Leo Heaton

Please note that you need to book this walk.

An exploration of what happened following the Roman Period. How did a Celtic speaking Latin educated Roman City become, first deserted, then recovered to become the leading City in a Germanic speaking Kingdom?

On the Anniversary of the Great Fire of London we retrace the route of the fire of 1666 from Pudding Lane to Smithfield.

RING IN THE EQUINOX VIRTUAL WALK

On this walk we look at London at the Equinox, its calendars, folklore and events associated with the beginning of Autumn

The walk tells the story of London’s myths and legends and the celtic origins of Halloween. .

We follow the route of a Zeppelin Raid through London. On the way we discover London in World War 1

A walk which explores the City of London that was destroyed by the Great Fire of London in 1666. By 1400 London was dominating the affairs of the Kingdom in spectacular fashion and had grown into a sophisticated medieval Capital, competing against the great capitals of Europe.

We will walk in the footsteps of Geffrey Chaucer, in the muddy City Streets, exploring the unhealthy conditions and poverty amidst great riches and pageantry. It was a cosmopolitan City with colonies of Italians, Germans, Dutch, and French who lived cheek by jowl with native Londoners.

By the 16th Century despite repeated visitations of plague, the huge influx of newcomers created non-stop growth in London. There was a corresponding increase in trade, in crime, in violence, and in creativity.
There were riots against foreigners, riots against May Revels, and burnings at the stake of both protestants and catholics as society struggled to cope with the impact of religious change.

With so many young people drawn into the City to work in its expanding industries, entertainment grew more sophisticated and poets could make a living penning entertainments to the masses. The London landscape changed dramatically as new renaissance inspired architecture began to replace the medieval timber framed buildings and the old medieval monasteries were pulled down.

We explore London in one of its greatest periods of change. The walk is given alternately by Kevin Flude & Leo Heaton

This is a walk for London Walks

The walk is led by Kevin Flude, a former archaeologist at the Museum of London, who has an interest both in the archaeological evidence as well as the myths and legends of London’s origin.

The walk will tell the story of the legendary origins of London which record that it was founded in the Bronze Age by an exiled Trojan called Brutus. The new City was called Troia Nova or New Troy, which became corrupted to Trinovantum, and then changed to Lud’s Dun and eventually Londinium. The legends provide a host of characters in the rich mythic past of London. Kevin will tell the stories, and relate some to the archaeological evidence.

The route starts at Tower Hill, then down to the River Thames at Billingsgate, London Bridge, up to the Roman Forum at the top of Cornhill, into the valley of the River Walbrook, passed the Temple of Mithras, along Cheapside to the Roman Amphitheatre, and finishing up in the shadow of St Pauls.

This is a London Walks Guided Walks. Look at their web site for a list of other of their amazing walks.

The walk is led by Kevin Flude, a former archaeologist at the Museum of London, a Museum Curator and University Lecturer.

A walk which explores London in the Middle Ages, from 1066 to the end of the 15th Century. In 1066 London was not yet the formal capital but as London expanded it took over from Winchester. By 1400 London was dominating the affairs of the Kingdom in spectacular fashion and had grown into a sophisticated medieval Capital. The Walk takes us from Westminster to Bishopsgate. and to the site of one of the few remaining medieval Churches at St Helens. We follow the route of the 15th Century London Lickpenny poem and look at everyday life in the City in the main markets streets of Cornhill, Poultry, Bucklersbury and Cheapside. We also visit the Guildhall and the City Wall. We will walk in the footsteps of Geoffrey Chaucer, in the muddy City Streets, exploring the unhealthy conditions and poverty amidst great riches and pageantry. We will see where the Italians, the German, the Dutch, the Jews, and the French lived cheek by jowl with native Londoners and immigrants from the Midlands.

This is a London Walks event. Look at their web site (www.walks.com) for a list of other of their amazing walks.

Here is a short podcast to go with the walk.

This is a London Walks event by Kevin Flude

The first British Brexit?   The Roman Britains kicked out the Romans in 407AD, and then asked them to come back  after a catastrophic collapse.  Faced with plaque, civil war, invasion, mass  immigration,  industrial decline, reversion to barter the authorities struggled against anarchy and the Dark Ages.

Or was it?   Wasn’t it a rather a transition into the Late Antique period in which life for most people went on much as before except paying taxes to local rulers not to distant Romans?

This is a London Walks event by Kevin Flude.

This is my schedule of Virtual Walks. One every Sunday at 6pm.

Bookings will be via Eventbrite and London Walks and links will be posted here.

This virtual walk is led by Kevin Flude, a former archaeologist at the Museum of London, who has an interest both in the archaeological evidence as well as the myths and legends of London’s origin.

A Walk for London Walks.

Archaeology in the late 20th and early 21st Centuries has revolutionised our view of the early history of London while its rich set of myths and legends have been largely forgotten. This walk is designed to set that right and give an insight into London’s legends, and how they relate to modern archaeological discoveries.

According to legend London was founded in the Bronze Age by an exiled Trojan called Brutus. He called the new City Troia Nova or New Troy, which became corrupted to Trinovantum. Around the time of Julius Caesar the name changed to Lud’s Dun and eventually to Londinium. Early archaeologists therefore looked for a prehistoric City, to add to the history they could read by classical authors of a City founded shortly after the Roman Invasion of 43 AD. When the Roman system broke down in 410 AD, historical and archaeological records become almost non-existent, until the foundation of St Pauls Cathedral in 604 AD. The two hundred year gap, sometimes called the Dark Ages, has another rich selection of legends. The walk will explore these stories and compare to the archaeology.

The route starts at Tower Hill, then down to the River at Billingsgate, along the River to London Bridge, up to the Roman Forum at the top of Cornhill, into the valley of the River Walbrook, passed the Temple of Mithras, along Cheapside to the Roman Amphitheatre, and finishing up in the shadow of St Pauls.

This is a London Walks Guided Walks. Look at their web site for a list of more of their amazing walks